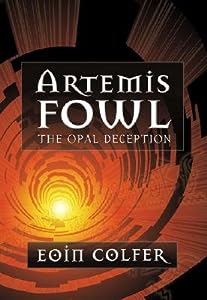 Well, that was intense.
Seriously.
First of all, despite yesterday's post where I longed to curl up and read War and Peace, I honestly can't stop reading Artemis Fowl.
I guess it's the fact that I managed to grab the first six books from the library at one time and when I begin a series I like, it's nearly impossible for me to put them down.
So yeah.

The adventures of Artemis and his fairy friends are becoming more dangerous and definitely more life-threatening. The Opal Deception is no exception. Opal Koboi, the pixie behind the goblin rebellion in The Arctic Incident, is back, though no body knows how at first because she's supposed to be in a coma under heavy guard at the hospital. Supposed to be. But when it appears that Captain Holly Short has shot and killed her own commander and then taken off for the surface, the LEP (Lower Elements Police -- forgot to cover that) clearly could have looked elsewhere than Holly.

In fact, Opal has killed Commander Julius Root and was after Artemis Fowl and his bodyguard Butler, as well. Holly had only a short time before they were vaporised by a bio-bomb. Of course, they are saved, but Artemis and Butler don't have any memories of the fairies. They were, after all, mind-wiped at the end of the last book. Look how that turned out. Not well.

Holly brings them up to speed, Mulch Diggums joins the crew, Artemis and Butler get their memories back, and the chase is on. Unfortunately, Holly and Artemis are captured before Artemis even has his memories back. They are nearly killed by trolls, which certainly doesn't help anybody.

With the LEP completely hoodwinked into not even considering Opal's deception (see what I did there?), this book is jam-packed with crazy happenings. I don't want to go any further into the storyline because there's a few spoilers already. But it all happens so quickly at the beginning of the book anyway.

If the books get progressively better like this, I can't imagine what the final book in the series will be like. Unfortunately, I do know a few major spoilers for the end, but I can pretend I don't. And I will give this book 4 stars. Not 5, but 4. I was sufficiently shocked and sad and happy by turns with all the events in this book. I was incredibly sad that Commander Root was murdered, to the point that when Maggie called me last night (to talk about Doctor Who mostly, what else?), what I said to her by way of hello was "Is Commander Root really dead????" Yeah.

If you ever tried to get into the Artemis Fowl series and couldn't get past the first couple of books, please, keep going. They get better. I promise. And you just might find yourself attached to more than a few characters.