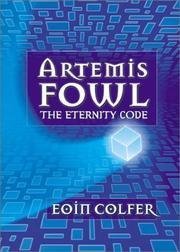 After all the complaining I did about Eoin Colfer's writing in the first two Artemis Fowl books, I was pleasantly surprised when I realized the third book wasn't nearly as choppy and badly-written. I guess he grew into the story a bit more? Or something?

Anyway, The Eternity Code was excellent. Fairy technology stolen by a tech magnate (at least that's what I consider Spiro), Butler killed and brought back to life, and apparently even the great Artemis Fowl II's plans can go awry sometimes.

What I found interesting about this book is that it actually didn't seem like Artemis was only in it for himself this time. He had his own motivations for showing the fairy technology to Spiro, but after that he was kind of helpless for a (very) short period of time. And though the entire fairy population was in danger, Holly Short and Mulch Diggums genuinely wanted to help Artemis, not only save themselves.

I like Holly. She's feisty, a good soldier, and clearly has a soft spot for Artemis. She also isn't afraid to disobey orders when they aren't going to help. Not that that's something to always condone, but within the frame of the story, it works.

I'm currently reading The Artemis Fowl Files, which has two short stories about Holly and Mulch, the Gnommish alphabet, interviews with various characters and the author, and various other info about the People. I won't review it in a separate post, but I will say that it's a good addition to the series!