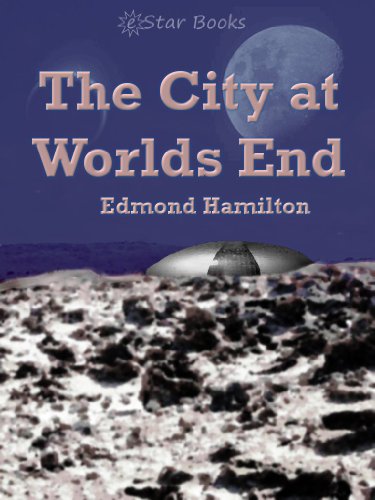 As many of you are aware, audiobooks are not particularly my forte. I have a hard time focusing if I can't also follow along with the words, plus many narrators are terrible and should never have been chosen. If you can't articulate your words, don't narrate something, thankyouverymuch. Anyway, I've found that the free service LibriVox offers some fantastic recordings, though all of older books because they have to be public domain. I don't mind this because I have a thing for science fiction from the 1950's, and there's plenty to choose from there.

Recently, I chose to listen to The City at World's End by Edmond Hamilton, which was first published in 1951. It was actually a really great story, and I totally believe George Lucas's initial inspiration for Chewbacca came from a character in this book. It's glaringly obvious, in my humble opinion.

In the years following WWII, there is a fear of more atomic warfare, with whispers of superatomic power. On a sunny June morning in Middletown, Indiana, a superatomic bomb detonates over the city, but it doesn't cause the destruction that had been imagined. Instead, the scientists of the city soon realize they've been thrown into the future -- far, far into the future. The earth is much colder, the sun is much redder, and the constellations make no sense. What follows is a desperate attempt to survive, where thousands of people are frightened for their lives. The people find an empty domed city, and move the population there, and the main character, Kenneston, is able to repair a huge communications device and start sending out a signal, in hopes that there are other humans on earth.

When months later a sleek black spaceship drops out of the sky, not even the scientists whom Kenneston works with are ready to see people and creatures from beyond the solar system. But soon there is talk of evacuation, and the people from the past are desperate to stay on Earth. Kenneston takes matters into his own hands again and soon there's a hope for staying.

Honestly, I can't give much more of a summary than that, because it's tough for me to remember character names when I can't see them haha. But really, this book was so cool and I enjoyed listening to it. The science isn't very accurate, obviously, but it doesn't have to be, and anyway it gets a serious pass because it was written before we knew much about space.

Posted by Elisabeth at 5:09 PM