The Perks of Being a Wallflower

For a book that deals with a world I am completely unfamiliar with -- sex, drugs, public high school, and The Rocky Horror Picture Show -- I totally fell in love with this book.
It's true.
Stephen Chbosky's The Perks of Being a Wallflower touched me very deeply.
No, I didn't agree with everything that happened in the book.
But sometimes, that's not the point.
You don't have to absolutely agree with all that the characters do and say to get something profound out of a book.

Charlie, the "wallflower" of the title, tells the story of his freshman year of high school in 1991 by writing letters to an unknown friend. We never learn the name of this friend, but that's not important anyway. What is important is that Charlie is incredibly intelligent for his age, he truly loves his whole family, and he thinks about everything. (See why I like him? I can actually relate/empathize with him because in those ways we are similar.) He is befriended by Patrick and Samantha, two seniors who are step-siblings. They really do take him under their wings and he joins their group of friends.

One of Charlie's teachers is always giving him books to read outside of class. One of these is The Great Gatsby. The rest are other great works of literature. This part of the story I really enjoyed, because, well, he was talking about the books.

In his position as "wallflower" among a group of mostly seniors, Charlie experiences a lot. He goes to his first party, he ends up trying drugs, etc, etc. He grows, he changes. And then the end of the year comes. And while it is the end of his freshman year of high school, most of his friends (particularly Patrick and Sam) are graduating and leaving. The most important part of the book is near the end, but I just can't write it out here because I really don't want to spoil it. Just know that a friend chastises Charlie for not being honest -- and it goes from there.

Because Charlie wasn't being honest, at least not in parts of his life. That's something anyone can learn. Be honest, even if it hurts you and/or the person with you.

I know that's kind of a lame review, but I have such strong feelings about this book and I'm having a hard time translating them into words. What I can say, however, is that this book really isn't appropriate for younger teenagers. I realize that Charlie is 14, but the stuff in this book is not what 14 year olds need to be reading. I am glad I read it now, at age 23, rather than when I was in high school, because it wouldn't have had the same impact on me then. As I said at the beginning of the review, Charlie's world is one I was totally unfamiliar with when I was his age; and I'm still unfamiliar with public high school (though not as much) and drugs (thank God!). And I really do not care much for the Rocky Horror Picture Show, haha. But really, none of that is the point.

Stephen Chbosky, though he riddled his book with sexual situations (both gay and straight...), drugs, cigarettes, a bit of language, and underage drinking, somehow knew how to capture the teenage spirit. At one point, early on in the story, Charlie is riding with Patrick and Sam in Sam's pickup truck. They are heading home from the homecoming dance, and before they go through a tunnel, they stop and Sam climbs in the back, wearing her nice dress. Patrick drives and they turn up the music. And suddenly they are out of the tunnel and they can see the lights of downtown. What Charlie says of that moment is perfect. And in that moment, I swear we were infinite. 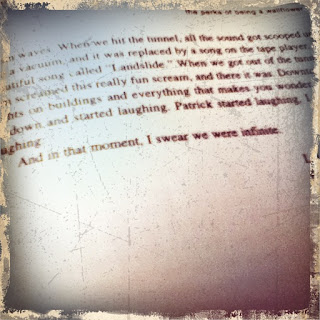 So, even with all the situations in this book that I didn't care for, I honestly have to give it five stars. Incredibly well-written, and Charlie was such a deep character. And like I said, Chbosky captures the teenage spirit. I can't recommend it to younger teens, and I grudgingly recommend it to older teens, but if your head and heart are in the right place, you're ready to read this book. Maybe you'll come away from it feeling emotionally drained (like I did), but knowing there was something special about it.

Posted by Elisabeth at 9:08 AM

Email ThisBlogThis!Share to TwitterShare to FacebookShare to Pinterest
Labels: 1990s, bildungsroman, coming of age, high school, Stephen Chbosky, teenagers, The Perks of Being a Wallflowers